All travel can be transformational, however, our golf trips can be life-altering too!

We specialize in custom-tailored golf trips for individuals, couples, families and friends — groups of any size.

We also organize themed golf tours for a group of 10 – 20 participants and invite individuals and couples to join.

Here are a few of the themed golf tours we organized since 2010: 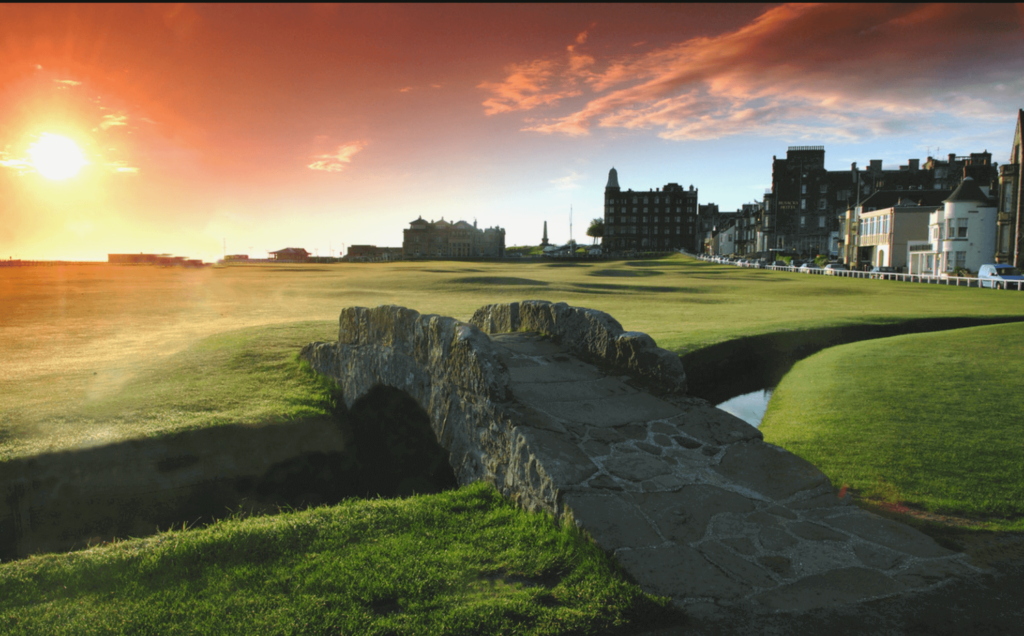 During the first segment of this tour, participants stayed in the charming town of St Andrews for 7 nights, luxuriating in being in the Home of Golf, like a full-time resident. All our hotel accommodations were in walking distance to the Old Course. As well as playing the Old Course (left), the New and Jubilee Courses in St. Andrews, we also ventured outside the town to play Carnoustie, Kingsbarns and Muirfield.

Golfers and non-golfers alike took the opportunity to visit the Golf Museum, Cathedral ruins and the graves of Old Tom Morris and Young Tom. Our private Welcome and Farewell Dinners were a huge highlight, and our musicians lit up the town into the wee hours of the morning on many occasions.

In our second segment, we headed up to the Highlands, stopping off for three nights in the ever popular Marcliffe Hotel in Aberdeen. While there, we played Royal Aberdeen and Trump Aberdeen, before heading north to Inverness and playing quirky Cruden Bay on the way. The group finished off by playing Royal Dornoch, perennially ranked in the Top 10 of all the World’s Top 100 ranking lists, Castle Stuart and Nairn. Was there some whisky tasting on this trip? You bet there was! 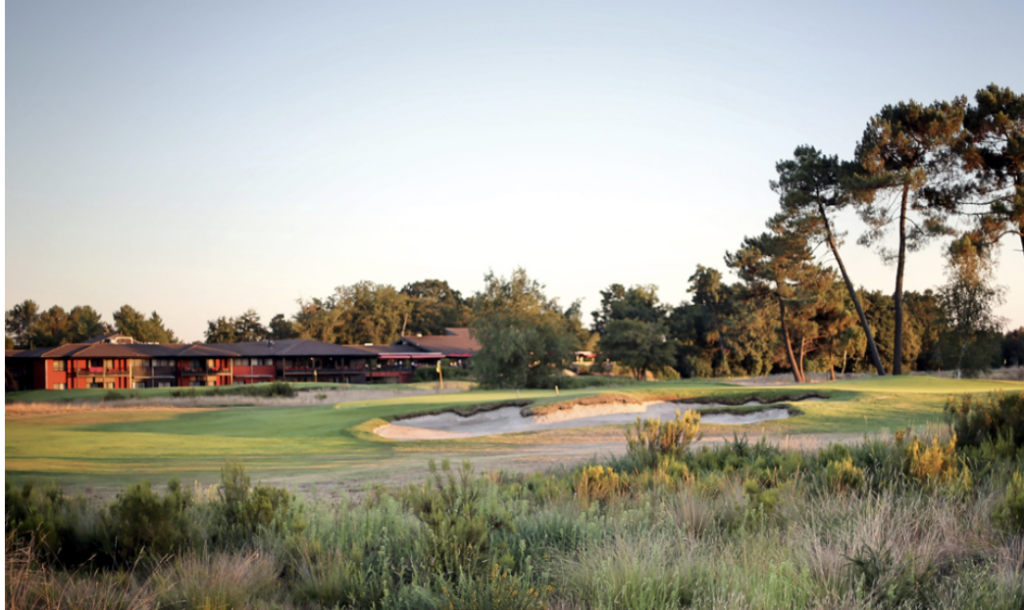 Kevin and Taba traveled to Bordeaux to participate in the Renaissance Cup, held at Grand Saint-Emilionnais Golf Club on June 21-24, 2018. We stayed in the village of St Emilion and scoped out a future tour: Golf & Wine to France. (Coming in 2023)

Along with spending time with the Mourgue d’Algue family, founders of SEGC, Taba was able to interview Jean de Boigne, owner of Chateau de Pitray, for the Terroir of Golf book. We will definitely be bringing our Golf & Wine Tour participants to his vineyard, which is conveniently located near the new Tom Doak course. 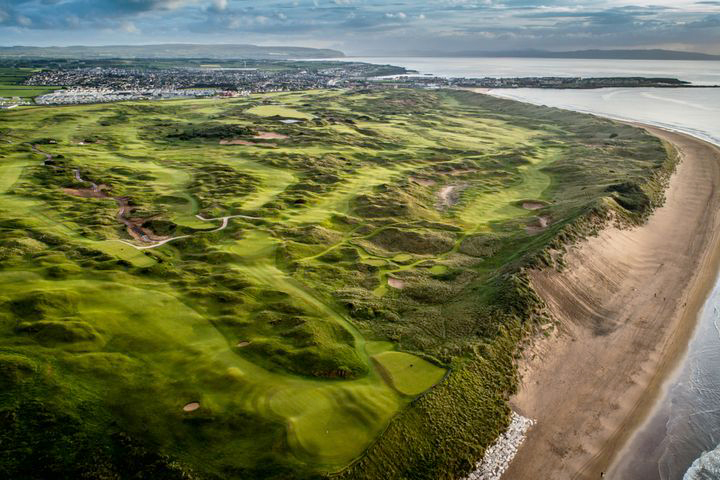 In 2017 we arranged a very special Melissa Carroll Charity Golf Trip to Northern Ireland and Dublin in mid June 2017. Our itinerary included playing Portstewart and Royal Portrush, as well as courses around Dublin. We raised over $25,000 for the Melissa Carroll Legacy Fund, part of the cancer related charity named A Fresh Chapter.

The late Melissa Carroll is the daughter of Paul Carroll, one of the three musicians who accompany the Golf & Music Tours we promote.

The Founder and CEO of A Fresh Chapter, is Terri Wingham. A cancer survivor herself, her mission is to give the gift of an exhilarating experience to those who have little time left on earth, but it changes their story to one that is very positive during their last days among us. Terri flew in from Canada just to be with us and speak at the dinner on the final night of the tour. 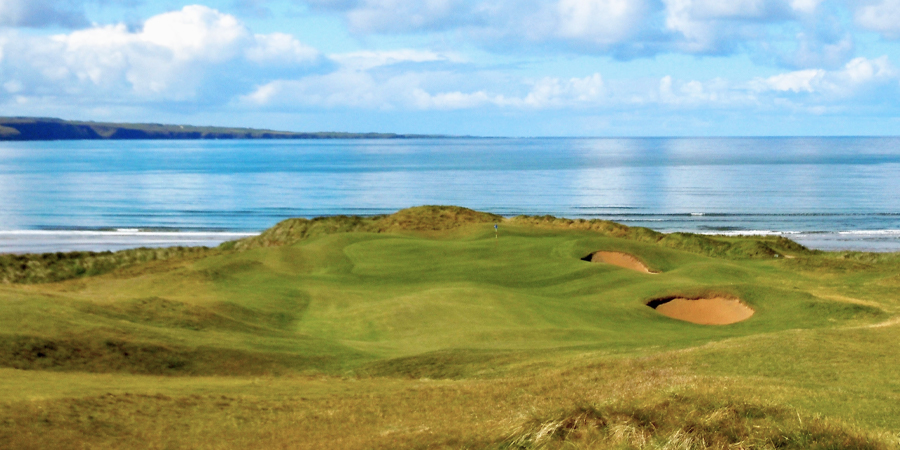 Back by popular demand, the 2016 tour was once again a sell-out and the popularity of it could be gauged by the fact that several of the participants had been on one of the previous two tours, despite it being the same SW Ireland itinerary of Old Head, Waterville, Tralee, Ballybunion, Doonbeg and Lahinch. In fact, one of the participants came on all three!!

Once again, our participants traveled with top Irish musicians, Mick & Fergie Begley and Paul Carroll, who played golf each day and entertained the group at night in the local pubs wherever we went. They always attracted big crowds, which kept the pub owners pouring lots of pints! A private tour to the Heineken Brewery in Cork was once again arranged, much to the delight of the group.

The musicians again gave a great concert in the Lahinch Clubhouse on the final weekend and this year, over 100 members turned up as they had heard about the lads from last year!! Our participants find the music infectious and are often inspired to join the lads on stage, just like Debbie Waitkus did during the grand finale on this occasion. 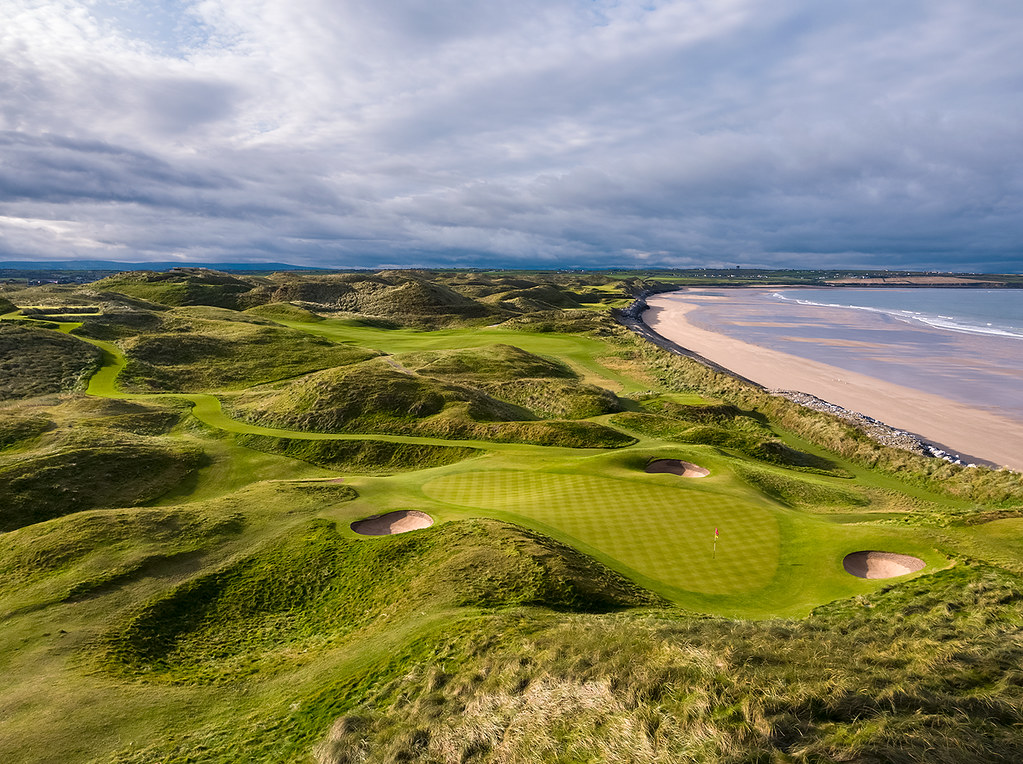 The reaction to our inaugural Golf & Music Tour was so positive, we decided to offer it again in 2015. We repeated the Southwest itinerary and once again, the tour was a sell-out, so we knew that we had a winning formula.

An added bonus to this tour was a private tour of the Heineken Brewery in Cork on the way from Old Head to Killarney. This was arranged by Fergie Begley, who works for Heineken in New York, and an impromptu concert in the private Heineken bar by the three lads was a huge hit with all the staff, including the Irish CEO!

Another highlight of the 2015 Tour was a “sing-off” at the ever popular Gaby’s Restaurant in Killarney, where a large group at a nearby table were happy to join in the singing and compete for the most songs. Even the restaurant staff joined in at the end of the evening. It was a blast!!

The tour concluded with a special concert in the Lahinch Clubhouse on the final night that was attended by around 50 members as well. 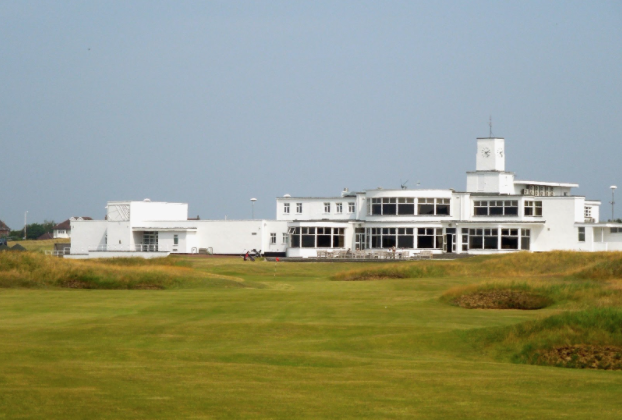 After our inaugural Samuel Ryder Tour to England in 2013, we put together a larger version of this trip in the week leading up to the 2014 Ryder Cup at Gleneagles, Scotland. Golfers arrived in London and transferred to The Grove Hotel for three nights of five-star luxury.The tour started with a visit to St Albans, Samuel Ryder’s home for his entire adult life. We played our first round at Verulam Golf Club, where Samuel Ryder learned his golf and later became Captain on two occasions.

Then we played six courses that have previously hosted the Ryder Cup, namely Walton Heath, Wentworth, The Belfry, Southport & Ainsdale, Royal Lytham & St Annes, and Royal Birkdale. The other four nights we are based at the four-star Ramada Plaza Hotel in Southport, England. Departure was from Manchester for the Ryder Cup or other destinations.

In 2013, we came up with the idea to arrange a Golf & Music Tour in the summer of 2014 with three popular Irish musicians, Fergie & Mick Begley and Paul Carroll, all avid golfers, and the response to the concept of golf every day and our own musical entertainment every evening was as expected and the tour sold out very quickly. There were also several non-golfing partners/spouses on the Tour and they had as enjoyable a time as the golfers.

The itinerary included all of our favorites in the Southwest, including three that are ranked in the Top 100 in the World: Old Head, Tralee, Waterville, Ballybunion, Doonbeg and Lahinch.

One of the fellas in our group had a hole-in-one at Waterville, so the music (and a few pints) flowed before we ever left the clubhouse! 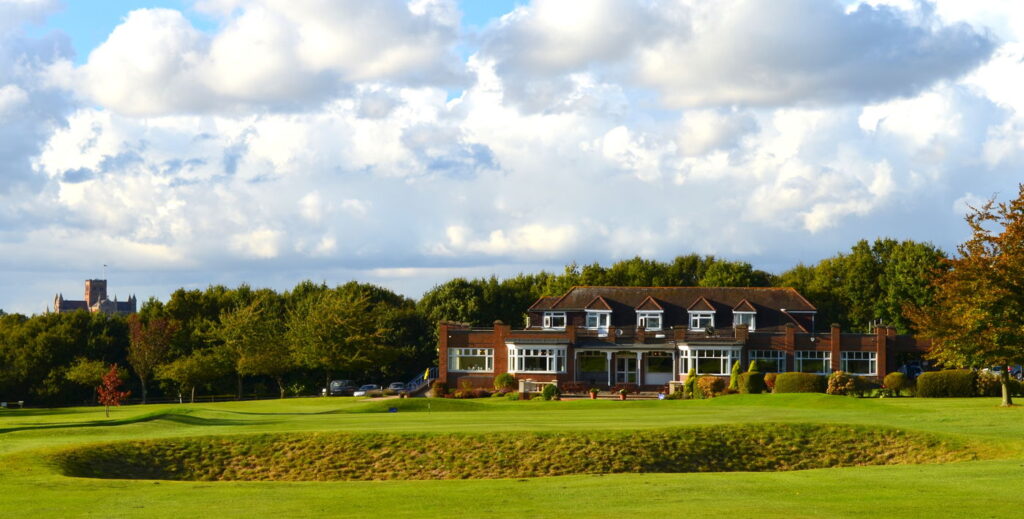 THE SAMUEL RYDER TOUR TO ENGLAND 2013

We were excited to announce a very special tour in 2013 to explore how the Ryder Cup Matches came about, starting with Samuel Ryder’s arrival in St Albans in 1895, where he set up his very successful penny seed packet business. At nearly 50 years old, some health issues led Sam Ryder to take up golf, initially with little enthusiasm. However, with a golf club in his hands for the first time, he immediately embraced the game and from that unlikely scenario, the Ryder Cup story was born!

We met with the Trustees of the Samuel Ryder Foundation in St Albans and they took us to Ryder’s offices, where his original desk and chair were still on view. We were given great insight to the visionary and philanthropic man who wanted to promote the camaraderie that is so special to the game of golf. 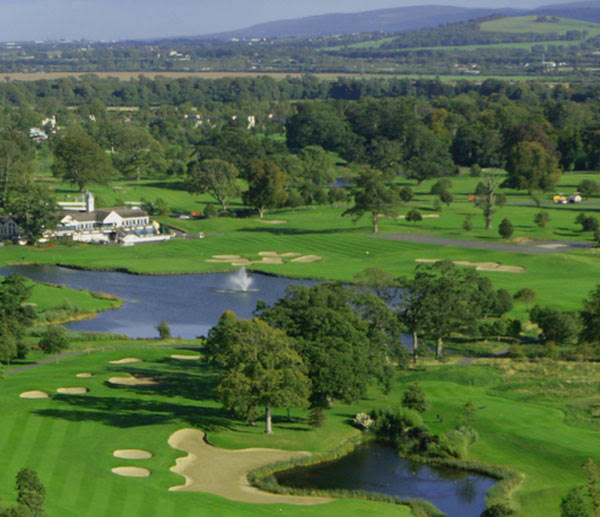 ALL ROADS LEAD TO THE K-CLUB

This extraordinary golf tour to the North and East coasts of Ireland included playing many of the finest pure links courses — some of the best in the world like Royal County Down, Royal Portrush and Portmarnock. It was a rare treat to play golf on many of Ireland’s greatest courses and take in a college football game—the American kind. The Emerald Isle Classic (September 1, 2012) was played at Aviva Stadium in Dublin between Notre Dame and Navy. The stadium has a capacity for 51,700 spectators, and it sold out within hours.

The tour culminated with a special 36 hole tournament played over the Palmer and Smurfit Courses at the K-Club competing for a special Notre Dame v Navy Commemorative Trophy specially commissioned from Tipperary Crystal. Our accommodations at the K-Club were sumptuous and we had a marvelous Awards dinner to conclude our tour with about 60 participants.

With Dr. Gary Wiren as our VIP guide we visited St. Andrews, Aberdeen and the Scottish Highlands. This Once-In-A-Lifetime trip to Scotland in July 2012 included playing golf in St. Andrews, The Home of Golf, and staying at the five-star Old Course Hotel. We then journeyed up to the Highlands and concluded this exceptional tour with a stay and dinner at the iconic five-star Balmoral Hotel in Edinburgh.

Our entire experience was enhanced with the PGA Master Professional, who as instructor, has been inducted into both the PGA Hall of Fame and the GOLF Magazine World Golf Teachers Hall of Fame.

Gary, also a golf historian and collector, regaled us with many stories on the history of the game. Another highlight of the tour was the special invitation from the late Mark Parsinen, owner and co-designer of Castle Stuart, to join him for the final day’s play of the 2012 Scottish Open and play the course on the following day with the Sunday pin positions. 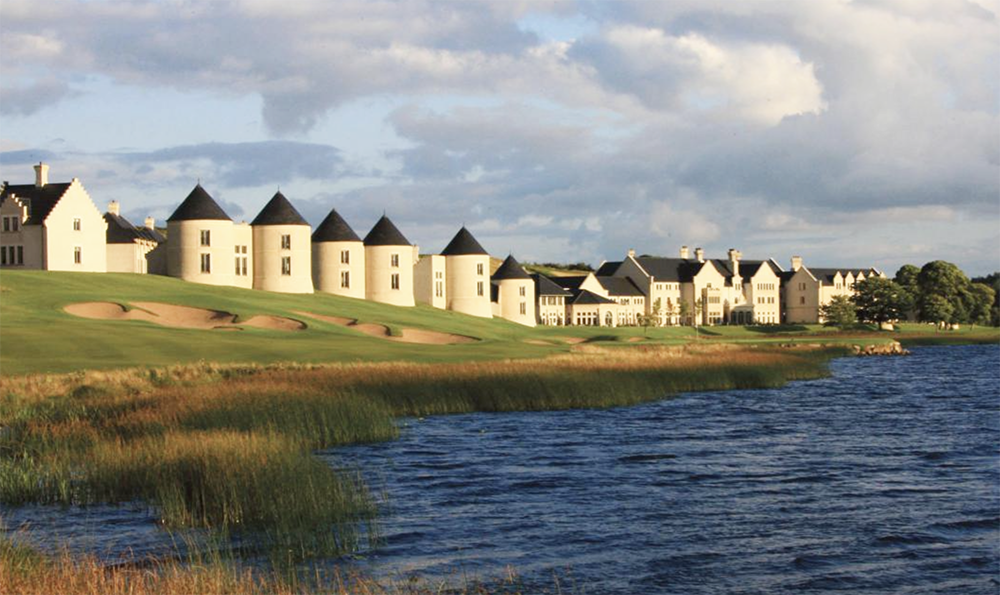 ALL ROADS LEAD TO LOUGH ERNE

The 2011 All Roads Lead to Lough Erne was a golf trip we created ahead of the 12th Solheim Cup matches (September 23-25, 2011) at Killeen Castle, northwest of Dublin. Our participants could stay on in Ireland to enjoy the 3-day contest for professional female golfers representing the United States and Europe.

Players in the field for Team Europe included: Laura Davies, Suzann Pettersen, Catriona Matthew, and Azahara Muñoz. American players included: Cristie Kerr, Stacy Lewis, Paula Creamer, and Michelle Wie. The match produced a dramatic comeback victory for Europe, the highlight of which was Suzann Pettersen scoring birdies on each of the final three holes against Michelle Wie to come from one down to win the match on the final green. The result meant that for the first time ever, Europe held the three major golf match trophies, the Ryder Cup, Solheim Cup and Walker Cup at the one time.

The Lough Erne Resort is a luxurious 5-Star hotel nestled on a 600 acre peninsula with spectacular views of the Fermanagh Lakes and the outstanding parkland Nick Faldo Course. It was a perfect setting for every aspect of our tour, providing a magnificent and challenging course, sumptuous food, great sightseeing — all leading to fantastic camaraderie. 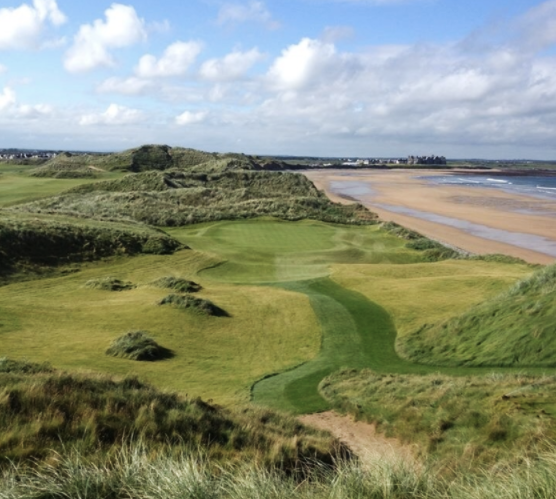 ALL ROADS LEAD TO DOONBEG 2010

The 2010 All Roads Lead to Doonbeg was the first in a series of golf trips we created ahead of major sporting events being held in Ireland or U.K. This one was held in the lead up to the 38th Ryder Cup (Oct. 1-4, 2010) at Celtic Manor Resort in Wales. Our participants had the option to fly to Britain from Ireland to attend the 38th playing of this event.

We all enjoyed staying in the five-star resort while we played the pure links course designed by Australian Greg Norman. Widely recognized as one of the best golfers of his era, he held the world number-one spot for over 300 weeks in the 80s and 90s.

After big storms in 2014 and the original par-3 fourteenth hole was lost to the sea, Martin Hawtree was brought in to design a new 14th hole and made some other updates.